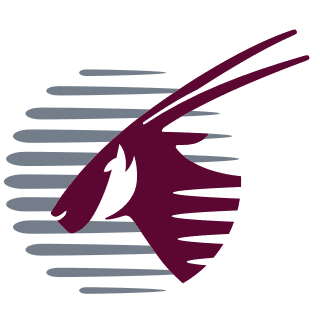 As a member of oneworld® airline alliance, Qatar Airways is one of the most renowned five-star airlines in the world today. From 2011 to 2016, Qatar Airways has consistently held its spot as the world’s top two airlines, according to Skytrax. Qatar Airways serves flights to more than 160 destinations across 70 countries in three class types: economy class, business class and first class.

A multiple award-winning airline, Qatar Airways was named ‘World’s Best Airline’ by the 2019 World Airline Awards, managed by international air transport rating organisation Skytrax. It was also named ‘Best Airline in the Middle East’, ‘World’s Best Business Class’ and ‘Best Business Class Seat’, in recognition of its ground-breaking Business Class experience, Qsuite. Qatar Airways is the only airline to have been awarded the coveted “Skytrax Airline of the Year” title, which is recognised as the pinnacle of excellence in the airline industry, five times.

Qsuite, a patented Qatar Airways product, features the industry’s first-ever double bed in Business Class, as well as privacy panels that stow away, allowing passengers in adjoining seats to create their own private room, a first of its kind in the industry.

Hamad International Airport (HIA), the airline’s home and hub, was recently ranked “Third Best Airport in the World”, among 550 airports worldwide, by the SKYTRAX World Airport Awards 2020. Rising from fourth position in 2019 to third in 2020, HIA has been steadily rising in the ‘World's Best Airports’ rankings since the start of its operations in 2014. In addition, HIA was voted the ‘Best Airport in the Middle East’ for the sixth year in a row and ‘Best Staff Service in the Middle East’ for the fifth year in a row.

Qatar Airways was the first Gulf carrier to join global airline alliance oneworld, enabling its passengers to benefit from more than 1,000 airports in more than 160 countries, with 14,250 daily departures.

Oryx One, Qatar Airways’ in-flight entertainment system offers passengers up to 4,000 entertainment options from the latest blockbuster movies, TV box sets, music, games and much more. Passengers flying on Qatar Airways flights served by its B787, B777, A350, A380, A319 and select A320 and A330 aircraft can also stay in touch with their friends and family around the world by using the award-winning airline’s on-board Wi-Fi and GSM service.

Qatar Airways proudly supports a range of exciting international and local initiatives dedicated to enriching the global community that it serves. Qatar Airways, the official FIFA partner, is the official sponsor of many top-level sporting events, including the FIFA 2022 World Cup, reflecting the values of sports as a means of bringing people together, something at the core of the airline’s own brand message - Going Places Together. 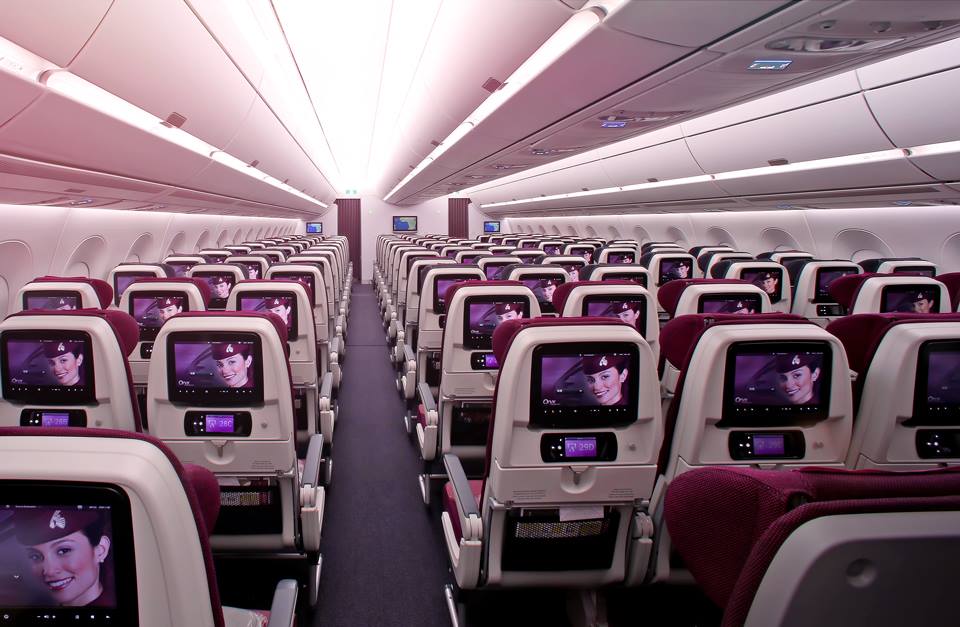 Qatar Airways’ Economy Class offers affordable flights with premium quality service and facilities to ensure passengers' comfort. The seating area in Qatar Airways’ fleets is one of the most spacious in the industry, keeping passengers comfortable even during their long flight. Passengers will also be able to enjoy in-flight entertainment through a personal monitor in their seats. An amenity kit is also provided to make sure that the journey with Qatar Airways is always enjoyable. 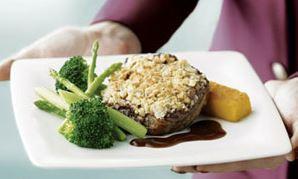 Qatar Airways collaborates with celebrity chef Nobu Matsuhisa to serve delicious meals on its flights. The chef has altered the flavors of the food to adjust to the passengers’ changing taste buds at 30,000-feet. The freshly prepared food are halal and served complete with a variety of hot and cold drinks. Passengers with special dietary requirements must order their meal at least 24 hours prior to departure. 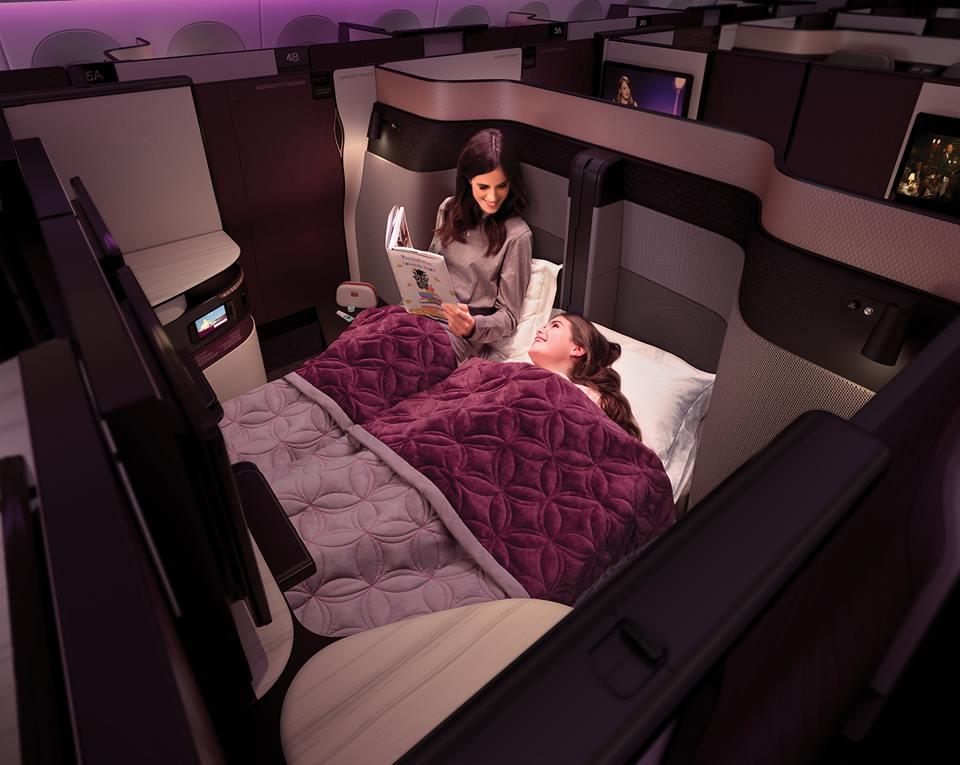 The passenger seats in Qatar Airways’ Business Class support those who want to work conveniently during the flight. The seat and table in Business Class are designed like a working space, equipped with LED lamp, laptop, and USB ports. Free WiFi connection is also available in several aircraft. When Business Class passengers opt for some relaxing time instead, they can enjoy the in-flight entertainment through the dual monitors in their seat, or lie down on their seat which can be converted into a flat bed. 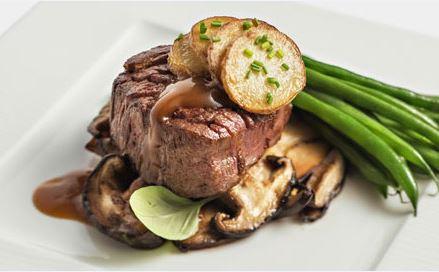 Passengers in Business Class can enjoy special Qatar Airways menus and beverages, such as mocktail and spicy zest, to keep them feeling fresh during the flight. Qatar Airways always serves halal food in every flight; therefore, a Muslim passenger does not need to make a special order. However, any special menus can be requested in advance at least a day before departure. 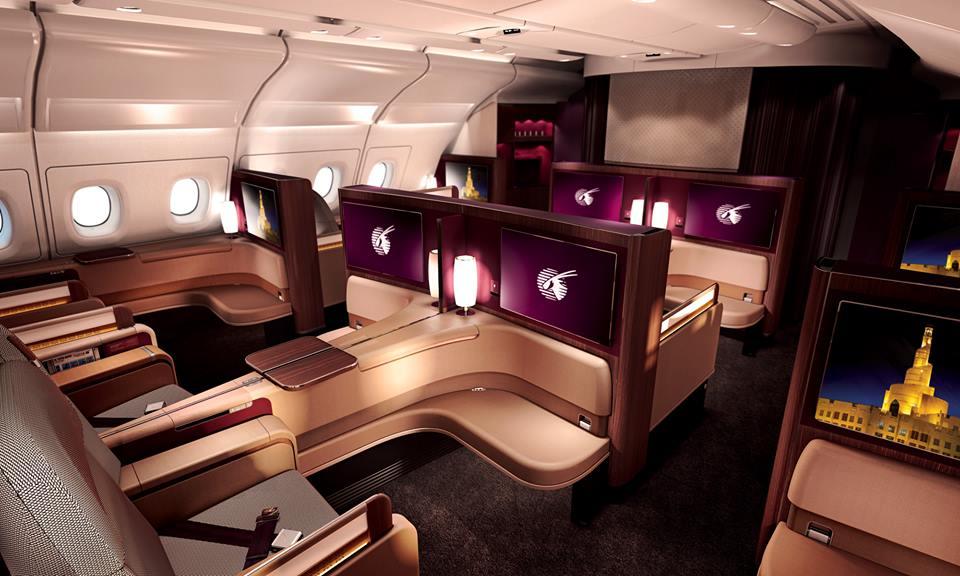 First class in Qatar Airways offers a luxurious flight experience with exclusive service. The first class cabin is spacious, with distance among seats far enough to provide comfort and privacy to all passengers as they sleep, watch movies, listen to music, play some games or even work during the journey. Every seat can be converted into a flat bed, complemented with a pillow, duvet, and linen blanket. During the flight, cabin crew will always at hand to meet the passengers’ needs. 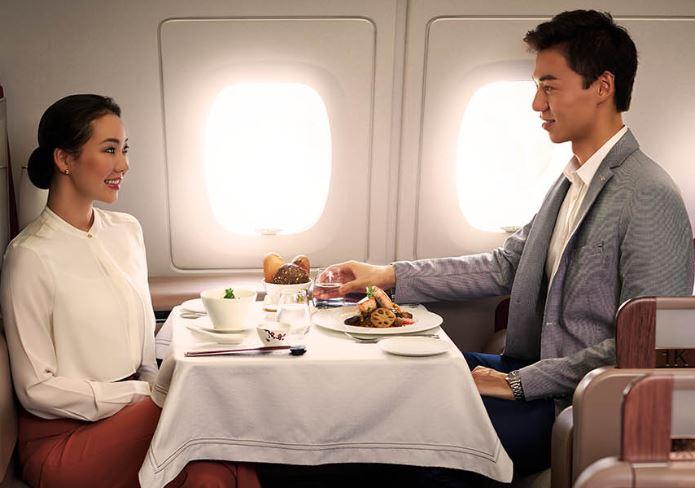 In Qatar Airways’ First Class, passengers can enjoy the signature dishes of Chef Matsuhisa on a beautifully set table using deluxe cutlery. There is a variety of refreshments such as wines and non-alcoholic drinks which passengers can enjoy before, during, and after meal. Passengers can also order special menus for infants and children, as well as to meet their vegetarian and health-based dietary requirements. Nevertheless, special menus should be informed to Qatar Airways at least 24 hours prior to departure. 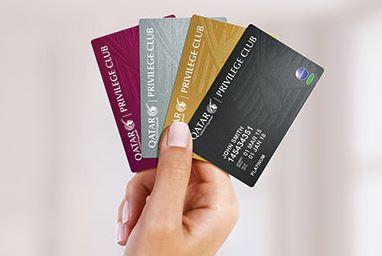 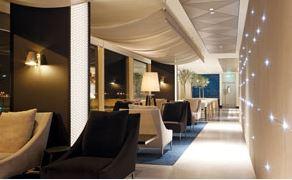 The Gold and Platinum Privilege Club cardholders can enjoy the facilities in the oneworld® airport lounges, which can be found at more than 600 airports around the world. Qatar Airways also has its own airport lounges in Hamad Doha, Heathrow London, Dubai, and Charles de Gaulle Paris for its First Class and Business Class passengers. Passengers can enjoy premium facilities such as friendly staff service, restaurant, spa, reading materials, and luxury open spaces in the lounge. 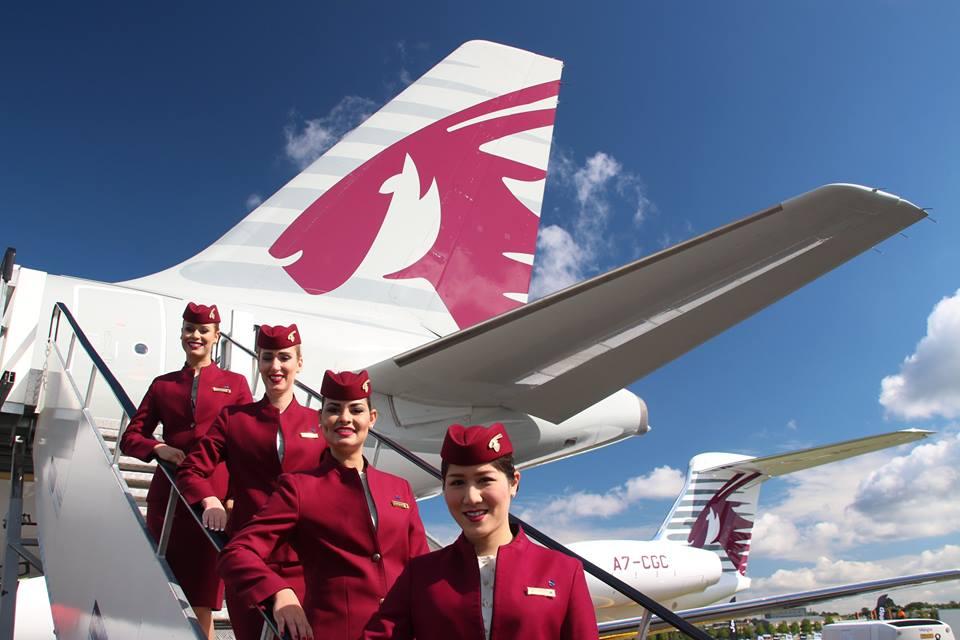 Qatar Airways’ cabin crew wear a white shirt and a red burgundy outer. The female flight attendants wear a knee-length skirt or long pants and a hat, while the male flight attendants wear black pants and a tie. There is a small Qatar Airways badge on the hat, which is inspired by the Qatar oryx head. The uniform is simple but very elegant and professional. In many cases, the crew would take off their outer and hat during the flight. The goal is to make them able to move more comfortably, hence enabling them to deliver better service for passengers.

Please find the check-in time for all Qatar Airways flights on the table below. Check-in time may vary if your flight is operated by a partner airline. Please check your e-ticket to ensure.

In general, refunds are permitted for personal reasons (self-cancellation, sickness, pregnancy, or death of a passenger), cancellation/rescheduling by the airline, force majeure, or double booking. However, different airlines have different policies regarding acceptable refund reasons. Please visit Qatar Airways Refund Policy for a complete information on refund.